It does not matter which ‘Best Day-Hikes on the Planet’ list you consult, it will usually feature New Zealand’s other-worldly Tongariro Alpine Crossing at some point or other. And for good reason, as I have just discovered.

With three active volcanoes, steaming vents, blue and emerald lakes with shimmering reflections and a desert landscape that feels more like the Bolivian Plateau than the typical, lush-green of the North Island, it is easy to see why 130,000 people a year attempt New Zealand’s most popular day hike.

Oh, and the conical rise of Ngauruhoe is also famous for its appearance as Mount Doom in Peter Jackson’s Lord of the Rings.

Tongariro was labelled New Zealand’s first National Park in 1887, and has acquired dual world heritage status for both the awe-inspiring natural landscapes and the cultural importance of the region. However, due to the highly-Instagrammable nature of Tongariro, more and more people are heading unprepared onto the trail, even though it is not a trek to take lightly.

The Most Popular Starting Point of This Point-To-Point Hike

Although the Crossing can be made in either direction, most people begin the hike at Mangatepopo Car Park (3,600ft) and spend the morning climbing east toward the Red Crater (6,188ft), before dropping down onto a steep section of loose dirt and volcanic ash. It is here that the four dazzling volcanic lakes come into view for the first time, as the wind whips sulfur-scented steam across the landscape.

The epic, daunting frame of Mount Ngauruhoe’s northern slopes dominate your entire right-hand horizon, the sight of which is so incredible that anyone would be forgiven for nervously searching their pockets for the presence of a magical ring.

To the north lies Lake Taupo, home of the largest eruption on Earth in the last 70,000 years, and to the west, the clearly-visible Mount Taranaki, probably the closest nature has come to producing a perfectly-symmetrical mountain.

You can drop the elevation quickly now, and trekking poles suddenly become worth their weight in gold. The experienced trekkers show themselves, using their poles to effortlessly glide down the slope in slalom-like fashion, as elegant as a skier on freshly-formed powder.

Then there are the less-experienced and people wearing running shoes, who fall frequently and often spectacularly. And also the children, who take great pleasure in sliding down the volcanic debris on their bottoms.

The trail divides as it reaches the emerald lake and levels off. If a bit of sulfur smoke does not make you queasy, head off to the right, which will take you on a stunning lap of perhaps the bluest, clearest lake you will ever see. The paths merge once more for a pleasant amble along Central Crater – a flat valley floor – around an old lava flow from an eruption of Tongariro’s Red Crater. 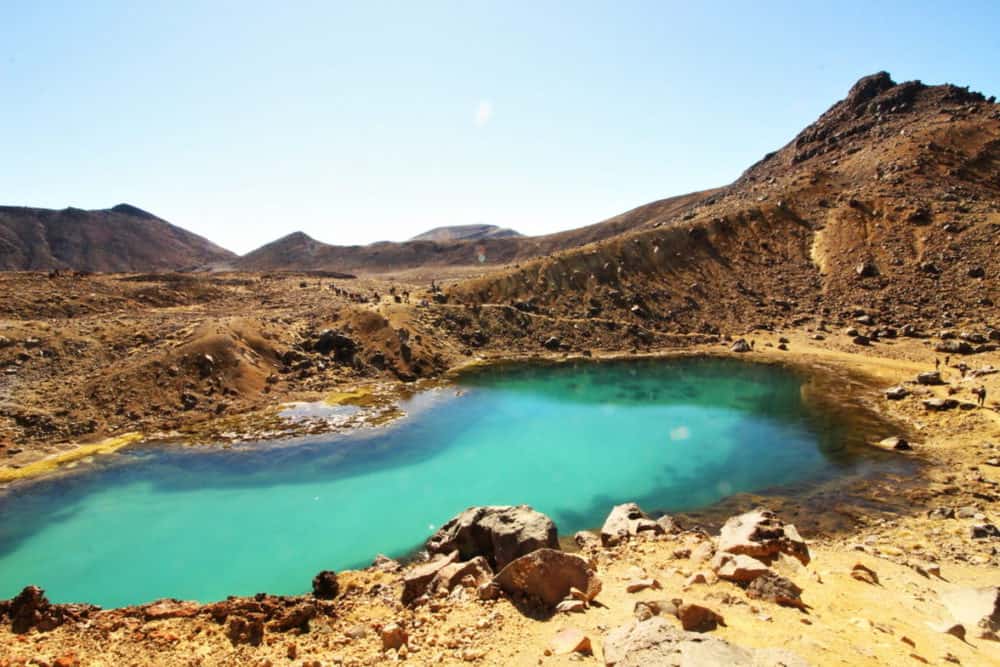 Well worth the detour – perhaps the clearest (and bluest) water I have ever seen.

There is one last climb to negotiate, but look back from where you have come and be rewarded by the alignment of the glacier-covered Mount Ruapehu (the highest point on NZ’s North Island), Mount Doom and Mount Tongariro for the first time, with the two red craters contrasted sharply against the deep-blue sky. Climb over a small mound and before you appears the much larger and aptly-named Blue Lake.

With a little over half the distance covered and all the climbing out of the way, you could be forgiven for thinking that the hardest part was behind you. However, there are still 3,600 vertical feet to descend on already-tired legs.

The crowd begins to thin out as different fitness levels start to come into play. Rather suddenly and in quite a surreal way you enter a forest so dense that the sun struggles to pierce the canopy. It can be quite a shock after not seeing a single tree all day.

Signs on the path warn you to move quickly over the next section as you are entering a high-risk lahar area (likely to be affected by a violent, super-heated mud flow), the thought of which is enough to evaporate the inevitable pain developing in knees and little toes.

Almost as suddenly as you entered it, you emerge from the foliage to the sun-lit Ketatahi Car Park (2,297ft), and the end of the hike. 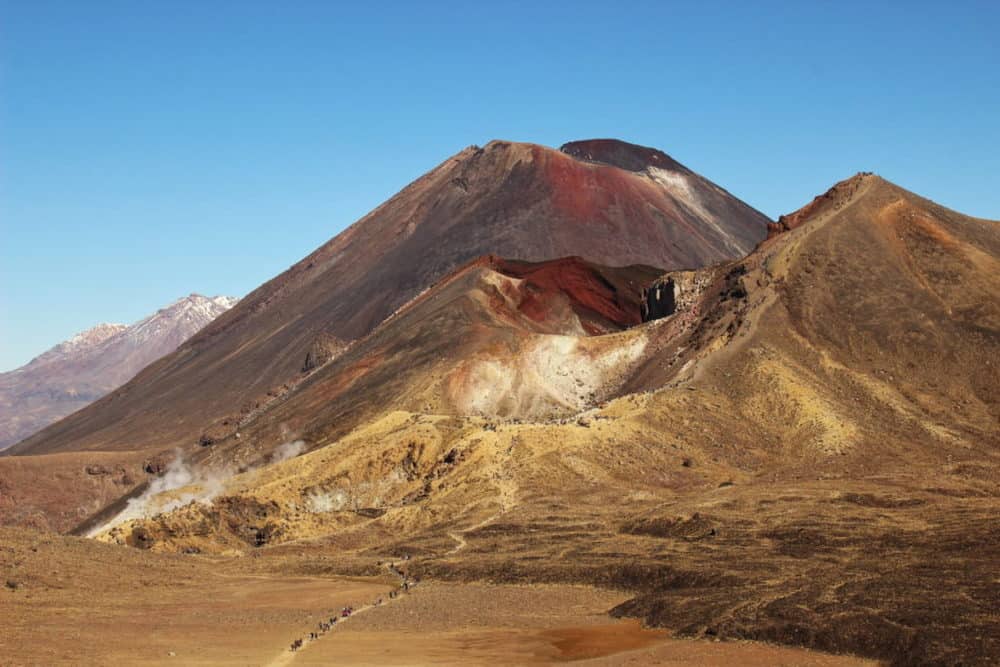 The snow-capped Ruapehu at the rear, Mount Ngauruhoe (Doom) dominating the middle of the shot, while the Red Crater is at the front. The darker material filling the valley is a lava flow from an old eruption..

How Difficult Is The Tongariro Crossing?

The Tongariro Crossing is listed as a moderate to difficult grade of hike. I am a fit 32-year-old man and I ride my bike absolutely everywhere, so I didn’t find the climb all that challenging, but I still had quite sore knees by the end of a fairly grueling descent. A good pair of broken-in hiking boots with adequate ankle support is essential. Those descending the volcanic terrain in running shoes were not having a good time.

Anyone with a moderate to good level of fitness will be able to complete this hike. Just plan to have sore legs for a couple of days afterwards. Better yet, go find some hot springs to bathe in!

Getting To Tongariro National Park

Tongariro National Park is smack-bang in the middle of the North Island, making it about a five-hour drive from either Auckland or Wellington.

There is a strictly-enforced four-hour parking limit at Mangatepopo Car Park, limiting the options of trekkers seeking to self-drive. It is possible to park at Ketetahi (the end) and take a shuttle bus to the beginning of the hike.

There are also return shuttle services from Whakapapa Village that will drop you at the beginning of the trail and pick you up at the end, with various pick-up times available throughout the morning.

There are dozens of operators, but I can vouch for Dempsey Buses, who were on time for both the morning and afternoon pick-ups. Other leading operators include Tongariro Crossing Shuttles and Summit Shuttles (links provided at end of article). 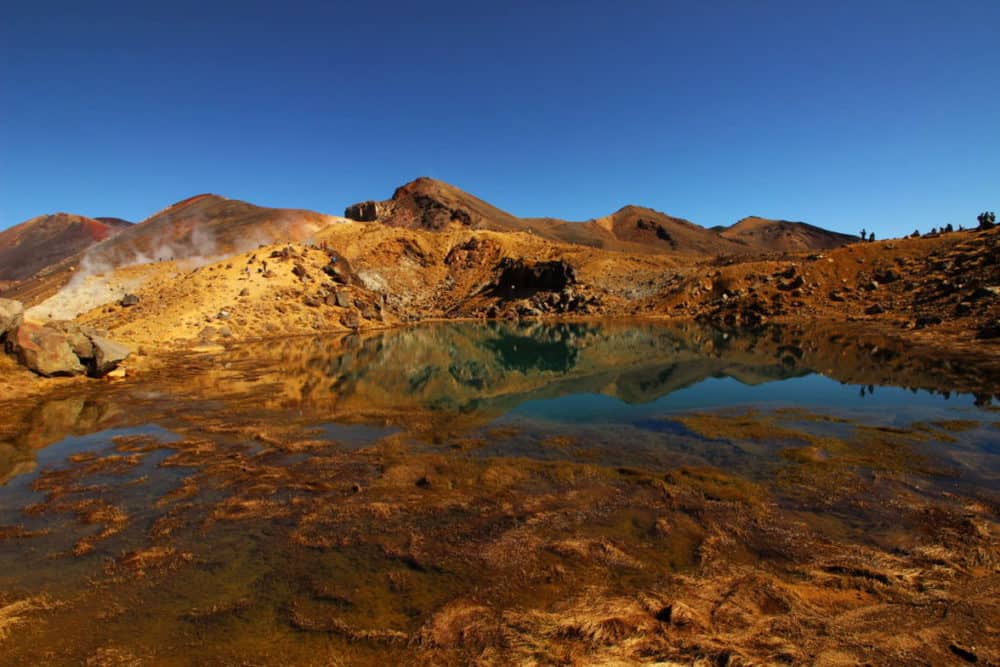 Best Time Of Year To Hike The Tongariro Crossing

The peak season stretches from December to March over the warmest months of the year, but do not underestimate the popularity of this trek. During this period, on particularly fine days over a weekend or public holiday, there can be 4,000 people on the Crossing, meaning queues for bathrooms and even on the track itself on narrower or steeper sections.

If you have a few days to play with, the shoulder months of November and April/May are good times to visit, however shuttle companies do cancel their services if the weather turns nasty, which happens quite a lot in this region, and more so during the cooler months.

At the time of my visit at the end of April, I had perfect weather the day I arrived and on the day of the hike, but the walk was impossible to access for the following three days as bad weather set in.

Follow the weather closely and plan your trip accordingly to avoid disappointment. Bear in mind that even in summer the weather conditions at higher elevations can deteriorate rapidly, and freezing conditions are not unheard-of.

The Crossing is covered in snow and ice during the winter months of July – September, and hikers should not undertake the trek without extensive winter walking experience, including ice-axe and crampon training. It is still possible to undertake this in winter without the necessary experience, but I would recommend you enlist the help of a guide.

Lodging and Camping Options Near The Park

Paid camping is possible within the Whakapapa Village at Whakapapa Holiday Park, who boast a range of accommodation options, from campervan parking to cabins and lodges. If you need something a little more up market, try the Chateau Tongariro Hotel. There is also a ‘freedom camping’ option at Tukino 2WD Car park, however your vehicle must be certified as self-contained to park here for the night. 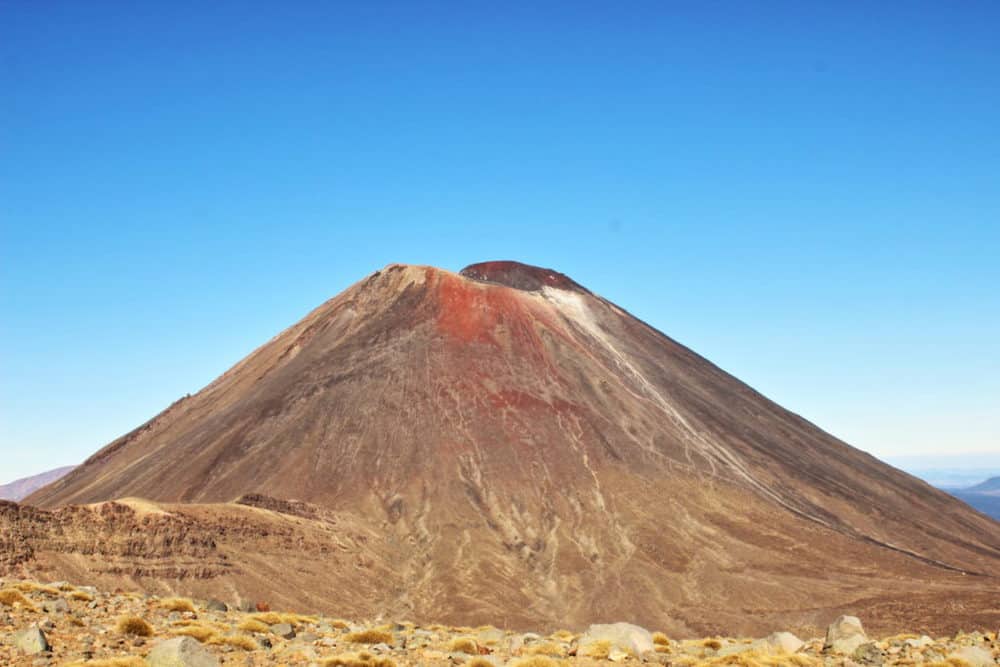 I keep expecting the Eye of Sauron to appear.. Mount Ngauruhoe, aka Mount Doom.

My Final Thoughts On The Crossing…

Don’t be daunted by the potential crowds. The Crossing is sufficiently large enough to spread people out after the initial morning rush. But do not take the trek lightly. More people are rescued from the Tongariro Crossing than on any other trek in New Zealand. Nearly 500 people have been rescued in the last decade, and there was even a paramedic team on their way up as I was nearing the end of the hike.

It took me 7.5 hours from start to finish including breaks and many (many, many) photography stops. There has not been an eruption in the area since Tongariro’s Te Maari craters went bang in 2012, and even Mount Doom, which erupts on average every 9 years, has not shown any signs of life since 1975. So it is well overdue.

But don’t let any of that put you off. It is a wonderful hike, and worthy of the best day-hike lists it so often frequents, and I would put it up there with the most spectacular things I have seen in the world.

Useful Links For Your Visit To Tongariro National Park

What Is The Scariest Hike In America?

Great stuff Gordy and awesome photos as well. Can you overnight on the mountain?

Cheers Al! No, not on the Tongariro Crossing itself, but on the the multi-day hikes (Northern Circuit and Round the Mountain Track) there are various overnight huts to stay in.

A great inspiring and informative read.?

Thank you Lhara! I am so happy you enjoyed it.

Thanks Noela! It was a pleasure to write about such a beautiful place!