The Great Trail is formally known as The Trans Canada Trail. It is exactly 14,996 miles long as of 2018 and runs all the way from the Atlantic Ocean in St. Johns, Newfoundland, then west to the Pacific Ocean in Victoria, British Columbia. From there, hikers head north to the Arctic Ocean at Tuktoyaktuk in the Northwest Territories.

In addition, you can then follow the trail back south via waterways all the way (nearly) to Edmonton from the Arctic!

The trail itself is made up of a variety of different trail paths, walkways, road sections, greenbelts, former railroad beds converted to trails, and even some waterway sections. This makes The Great Trail impossible to complete on foot alone. Although, The Great Trail is long enough that simply the walking sections will leave you hiking for years.

So, how long would it take to hike the great trail? If you were to hike The Great Trail in Canada straight through at a pace of 20 miles per day, it would take approximately 750 days (with zero rest days) to complete the entire hike and touch all three ocean coasts.

That pace previously mentioned does not even include any days off of the trail to rest and recover if needed. Also, if you were to hike at a slower pace than 20 miles per day which is considered a faster hiking pace, The Great Trail would take much longer to complete.

Furthermore, that 20 mile per day pace does not account for days when the weather or temperature in Canada might be too dangerous to be outside attempting to hike 20 miles then set up camp.

There are over 400 different individual section of The Great Trail. Each of these sections is individually funded, developed, and taken care of by the local governments, trail group advocates, and conservation authorities. Trans Canada Trail is also a non-profit group that looks to oversee the trail and helps these different groups that work on and maintain the trail raise funds to update and complete sections as needed.

If you are thinking about attempting to hike The Great Trail, carefully spend time preparing and planning for your trip. There are sections of the trail where shelters and water are abundant however there are also sections of the trail that are desolate. Being prepared and ready for everything that The Great Trail will throw at you is important if you want to give yourself a chance at success. 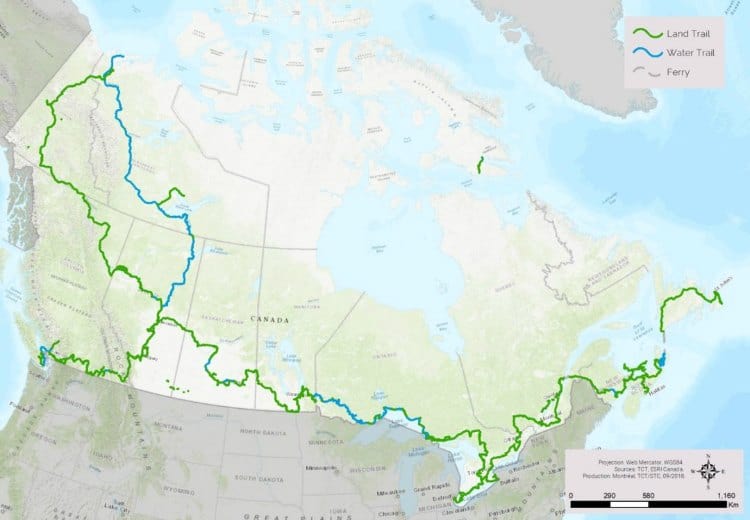 History Of The Great Trail

The Great Trail is constantly being added on to and updated. Some of the road sections and greenbelt’s are being taken out in favor of more remote legitimate trail sections and as The Great Trail becomes a more known and popular destination, it’s founders hope that all the paved sections are eventually eliminated.

The first man to completely hike The Great Trail was Dana Meise who finished in November of 2018. He was inspired to begin his journey after his father lost the ability to walk. Meise did not complete some of the waterway sections that The Great Trail has but did hike every trail and road on The Great Trail to be the first to touch Canada’s three oceans on the trail.

It took Meise nearly a decade to complete The Great Trail because for half of the year he would work as a forestry technician. But, the trail is so long, it cannot be complete within a calendar year anyway.

Meise was also forced to take nearly three years off away from the trail because of a back injury and concussion suffered at work. However, he always continued his hike right were he left off.

Despite the bitter cold temperatures that he constantly ran into (especially as he made his way up north into the Yukon), having ravens destroy multiple tents, and having all of his possessions stolen and burned, he was finally able to complete his journey.

The first woman to complete The Great Trail was Sarah (Rose) Jackson who finished the entire west to east portion of the trail on a solo expedition in 2017. It took her one day less than two years to complete her trek but she still has yet to complete the south to north section of the trail that goes from the Pacific Ocean up to the Arctic Ocean.

Once she completed college and after hearing about the Camino de Santiago from an uncle who had taken that pilgrimage himself, the 24 year old from Edmonton decided to complete a long distance hike of her own. She settled on completing The Great Trail.

She is currently the only woman to have completed the entire journey from one coast to the other. You can follow her on Instagram to look back at a photograph she took on every day of her journey along The Great Trail.

Who else has completed The Great Trail?

Unfortunately, there are not many other notable people who have completed all of The Great Trail. Because The Great Trail is so young compared to other trails like The Pacific Crest Trail or The Appalachian Trail that have been around for nearly a century, The Great Trail has not been traveled as much as these other better known trails.

If you were thinking about attempting to hike The Great Trail, you could have a legitimate chance to capture a record. Since there have not been so many attempts at The Great Trail, hiking the entire trail in less than 2 years or in one continuous go would make you the first person to accomplish either of those feats. Furthermore, I am certain there are plenty of other milestones The Great Trail has to offer.

Although The Great Trail is still fairly new to the world, there is some minor controversy surrounding it. Mainly that in the vision for The Great Trail, it would be a path that was far enough from roads to mask traffic noise and avoid collisions. Currently, The Great Trail does not do this.

The Trans Canada Trail organization is working to update the trail to take it away from roads. But, this vision for the trail is only in principal currently. It will take a lot of money and volunteer work to make the necessary updates to The Great Trail so that every single section of the trail is safe for all. You can join the mission, get updates and donate towards the cause here: thegreattrail.ca

What is the Longest Hiking Trail in the World?

Definition of a Thru-Hike: What You Need to Know